This winged Bastet pendant is a beautiful piece for anyone who loves this goddess, or just a fan of Egyptian cat pendants! Available in .925 sterling silver or antique bronze, she is based on a pewter pendant someone brought to me to remake in sterling silver. She measures 7cm long with the bail and 4cm wide. The pendant is 1cm deep and hollowed out in the back, which is textured. The bail is cast onto the tip of the tail and the opening is large enough to pass a 5mm wide chain. Large but lightweight, she is quite the statement piece! This pendant is made to order, but believe me, it's worth the wait!

Bastet was worshiped in Bubastis in Lower Egypt, and was depicted as a cat, representing a gentler aspect of the protector goddess Skemet. As protector of Lower Egypt, she was seen as defender of the king, and consequently of the sun god, Ra. Bastet was also a goddess of Goddess of protection, cats, perfume/ointments, fertility, children, music, the arts, and warfare, pregnancy and childbirth, possibly because of the fertility of the domestic cat.

Domestic cats were increasingly worshiped and considered sacred. When they died, they were embalmed, coffined and buried in cat cemeteries. The domestic cat was regarded as living incarnation of Bastet who protects the household against vermin such as mice, rats (which threatened key food supplies), and snakes—especially cobras. Cats in ancient Egypt were highly revered and the personification of Bastet. Cats of royalty were, in some instances, known to be dressed in golden jewelry and were allowed to eat from the plates of their owners.

Huge beautiful pendant! Detailing is amazing, and heavy solid sterling silver. I love it! Seller made one of these in silver upon request as they had been out of stock. Excellent customer service, fast shipping, and lovely product. Would recommend this shop! 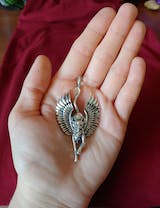 C
Colleen F
This pendant is GORGEOUS! Very detailed a...

This pendant is GORGEOUS! Very detailed and very unique. Heavy piece of silver. I love it!

The hand made sterling silver winged Bastet is absolutely STUNNING!! The detail is is beyond being able to describe. This piece is just BEAUTIFUL!!!! Stephenie has wonderful talent and the piece shows it!! Heavy and beautiful!! Well worth the price, plus some.
Ordering and shipping was FLAWLESS! Arrived way earlier than expected and packaging was perfect!